On my way to Amsterdam, I was thinking what the research into improving cybercrime reporting really needs. I thought that to do research that convinces the government to take cybercrime more seriously, I must be able to tell the story of cybercrime victims and those who help them in the simplest format whilst preserving the drama that takes place in people’s lives.

This was confirmed to me during the informal discussions with Dr Rutger Leukfeldt when we debated how cybercrime research is evolving in the Netherlands. He spoke about the tensions of doing government research in this area, which favours funding projects in traditional crime (i.e., robberies vs. online scams). I believe that this is, in part, because we’re still only learning to tell the story of what happens in cybercrime. As Wittgenstein theorised, language defines the boundaries of reality. Unless we learn to speak about something effectively, it is as if it didn’t exist. Dr Leukfeldt observed that research into SMEs (Small-to-medium sized enterprises) funded by government proxies is flourishing. I wondered whether the Dutch government fails to see the tax-paying cybercrime victim as its primary stakeholder but takes the reverse approach to the Dutch SMEs.

This approach seems to be shared with the United Kingdom where responsibilisation is rife. Responsibilisation is the trend whereby the governments impart education on cybersecurity to its citizens but disengage with them if they become victimised. Although, as cyber-attacks evolve, the possible damage to the state through a single infected citizen can soon come to resemble a Hollywood-style blackout with digital infrastructures becoming compromised in life endangering ways.

I also benefitted from visiting the building that houses the NSCR and linking in with my fellow PhD colleague whose research interests are closely aligned to mine albeit with a focus on understanding the offender’s decision-making process in an empirical setup. I experienced it as reassuring to see how we faced similar setbacks in research. It was clear that to succeed in research one must be a highly resilient self-starter prepared to fail a lot and recover frequently and quickly.

In conclusion, I enjoyed my visit to Amsterdam and the NSCR as I had an opportunity to compare the cybercrime situation in the Netherlands with that of the United Kingdom. Since, the problems we share are the same, we should join forces and convey to our respective governments by persuasive research that cybercrime is a worsening international concern. If it is not taken extremely seriously now, then we might not get a second chance in the future.

Dr Rutger Leukfeldt and Dr Juraj Sikra exchange gifts on behalf of the NSCR and University of Strathclyde respectively. 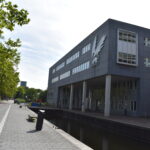 The building that houses the NSCR